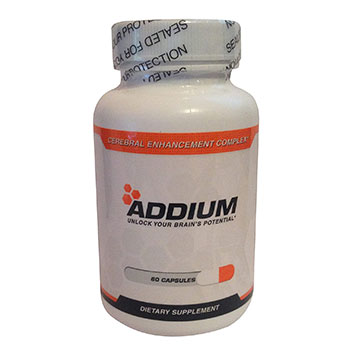 A first look at the Addium ingredients gives you the impression that it has all that’s needed to make a great stack. It was referred to as the ‘limitless pill’ earlier but the truth is far from it. It does not stand up to its claims of making you smarter and efficient. Our concerns circle around two ingredients- vinpocetine and caffeine. The former is not researched well for long-term safety and the latter may lead to side-effects. However, the bigger worry is the proprietary blend of this formula. We do not know the exact dosage of each ingredient. We do not recommend a brain or even a dietary supplement where the dosages are not revealed by the maker.

Addium is a nootropic that claims to boost your mental capabilities, enhance cognitive functions, and make you more active.

The manufacturer claims that it is effective for an overall improvement in mental health and is an excellent option for regular intake.

We also found the claim that all the ingredients in the formula come from natural sources.

Our team wanted to evaluate all these claims. We studied every ingredient and consulted the scientific literature for an in-depth analysis.

We also researched the company by looking at its profile on the Better Business Bureau (BBB) website.

Our team also found some customer reviews about Addium to have an idea of what the existing customers thought about it.

In this article, we will not sugar coat anything or paint a doomsday scenario. We’ll take an objective approach and explain everything with references from scientific research.

So let’s take a deep dive into the facts regarding Addium, shall we?

Table of Contents
What is Addium?
About Manufacturer
Addium Claims
Addium Ingredients Analysis
Are Addium Ingredients Safe & Effective?
How to Take Addium?
Does Addium Provide 100% BrainPower?
Customers Reviews
Where to Buy Addium?
Is Addium A Good Nootropic For You?
Conclusion

Addium is a supplement prepared to empower the brain. The company says that Addium is an excellent choice for promoting a healthy brain.

The manufacturer also claims that it can treat a lack of alertness in daily life.

This nootropic is available in the form of capsules.

The manufacturer has the same name as the product.

Addium, the manufacturer, has its head office in Jackson, Wyoming, United States.

The product was originally named as ‘Addium-limitless pill' but became popular as ‘Addium'.

A look at the profile on BBB showed that Addium is currently out of business.

The manufacturer claims that Addium:

The ingredients in the formula are:

Tyrosine is an amino acid required by the body in small amounts.

It helps in the maintenance of adequate neuronal function and promotes a good mental performance.

A systematic review concluded that tyrosine could play a vital role in improving cognition.

Tyrosine can also be useful in combating with stressful situations.

Research indicated that dietary tyrosine could replete the cognitive resources in the body and help with learning.

Gamma Amino Butyric Acid (GABA) is a neurotransmitter in the brain that keeps the stray impulses in check.

Several consumers of GABA containing supplements seem to have a beneficial effect.

However, research doesn’t agree that GABA has any effect on mental health.

There is no credible and unbiased evidence available that showed the ability of GABA to cross the blood-brain barrier.

The ability to cross the blood-brain barrier is essential for any drug to have an effect on the central nervous system.

So, GABA, as an ingredient, may just be another placebo.

Bacopa Monnieri is an ayurvedic medicine that has been used for curing several maladies.

A rigorous analysis of medical literature shows that bacopa is an excellent choice for improving cognitive functions.

It also enhances the processing power of the brain and makes it work more actively.

Alpha glycerylphosphorylcholine (Alpha GPC) is a natural compound present in the brain.

It contains choline that is essential for the conduction of nerve impulses.

A study found that alpha GPC can increase the regeneration of neurons and can play a role in improving cognitive abilities.

Vinpocetine is a synthetic chemical compound. It resembles the extract of Vinca minor plant.

Research on Oncotarget states that vinpocetine can play a useful role in coping with the injury caused by cerebral ischemia.

It can also act as a potent anti-inflammatory agent in the central nervous system.

However, clinical trials are still underway to determine the effectiveness and side-effects of vinpocetine.

Huperzine A is an herbal extract that has been a part of Chinese medicine for centuries.

The Chinese used it to treat headaches and inflammation.

improvement of cognition and quality of life in Alzheimer’s patients.

Research showed that huperzine A could protect the neurons. It can also act as an effective anticonvulsant.

L-theanine is an amino acid found in certain mushrooms and tea leaves.

It can play a useful role in neuronal disorders.

A published research article in the Journal of Clinical Psychiatry suggests that theanine can play an essential role in coping with anxiety and stress.

It can also be helpful for people with schizophrenia.

Research has shown that theanine, as a food additive, improves cognition and creates a sense of relaxation.

Caffeine is a CNS stimulant present predominantly in coffee and cola.

Coffee is used worldwide for its role in increasing the level of mental alertness and activity.

A Study on Current Neuropharmacology suggests that caffeine can cause an increase in heart-rate and disturb normal rhythms.

This research also indicates that caffeine can cause anxiety and seizures.

Research on Karger says that caffeine can lead to a change in behavior in healthy individuals.

Phosphatidylserine is a phospholipid that is essential for the transmission of impulses in the neurons.

Phosphatidylserine as an ingredient helps to enhance memory and cognitive functions.

A study found that phosphatidylserine plays an essential role in the maintenance of neuronal membranes.

This benefit makes phosphatidylserine an excellent choice for protection against age-related degeneration of the brain.

Vitamin B3 is an important water-soluble vitamin. It cannot be produced in the body and should be taken in the diet.

However, the dietary requirement is not very large and can be easily supplemented.

Research suggests that this vitamin can be a practical choice against neurotoxins.

It also protects against environmental chemicals that can lead to a degeneration of neurons.

A trial on lab rats found that B3 improves recovery after a traumatic injury to the brain.

Vitamin B6 is part of the vitamin B complex family. Like other water-soluble vitamins, vitamin B6 also plays essential roles in the body.

It is especially useful in promoting memory and plays protective functions.

In a clinical trial, vitamin B6 was found to protect against memory impairment due to infectious disorders.

Research published in the Journal of Clinical and Experimental Hypertension says that vitamin B6 activates certain signaling pathways in the brain.

These pathways protect against the damaging effects of toxic compounds.

Regarding the safety profile, Addium is not an attractive choice.

Many ingredients, present in Addium, can lead to severe side-effects. Out of these, caffeine can be the most debilitating.

An increased concentration of caffeine can lead to insomnia, and increased heart-rate, behavioral changes, and seizures.

Some customers even reported severe stomach ache after consuming a capsule.

Some ingredients in Addium have proven scientific benefits. However, the product itself doesn’t contain the required amount of each to cause any significant benefit.

Some of the warnings mentioned on the label are:

From the information obtained from the label, the consumer should take one capsule daily as a dietary supplement.

In plain and simple words, it doesn’t.

The main reason for that is Addium does not mention the concentration of each ingredient separately.

So, we cannot say for sure whether each ingredient is present in the amount required to produce any beneficial effects.

“Gives me a boost of energy throughout the day. No hard crash, which is great.”

“This supplement is dangerous and should not be sold. I have taken brain supplements for a while, and each of them is very similar, EXCEPT for Addium. On the day I took Addium many blood vessels in my hands burst, and two on my face burst. With their “proprietary blend” not being detailed as to the amount of each ingredient (only listed in the aggregate of 500mg Proprietary Blend) you have no way of determining which ingredient may or may not be too much. I can only recommend staying away from this supplement.”

“The first day I took these pills, I got an almost instant and painful stomach ache from hell. I was out of work that day and haven't taken them again. I will say that they might have worked. Because I sure have a very good memory of how much pain I was in.”

The company does not seem to be in the business currently, according to online sources. The product is also unavailable at online retailers.

The company does not offer a return policy regarding this product at the moment.

So, if you have purchased Addium from any source, you may not be able to return it if you don’t like it.

The manufacturer does not offer a money-back guarantee.

Is Addium A Good Nootropic For You?

Addium as a nootropic, fails to pass the quality standards.

The ingredients in any excellent brain supplement should be effective scientifically and present in the right concentration.

Their proprietary blend on the label does not show the amount of each ingredient separately.

Consequently, there is no way to find out whether they have increased the concentrations of ingredients in the formula to a dangerous level.

Moreover, Addium has several side-effects and raises several questions regarding its safety.

The company also claims that all the ingredients are natural. But, we do not agree with that statement.

Vinpocetine, one of the major ingredients in Addium, is a synthetic chemical compound.

Although there are studies available that prove its effectiveness yet the fact that it is a synthetic compound that can make anyone dubious.

You may think we’re exaggerating, but more than half of the customer reviews we found pointed in the negative direction.

But, the good news is that there’s an excellent alternative to Addium in the market.

Unlike Addium, Mind Lab Pro is an all-natural brain supplement.

It contains 11 natural ingredients that have a vast range of scientific studies to support their mental health benefits.

The best part about Mind Lab Pro is that it does not pose any ill-effects to the health.

The concentration of each ingredient is well-balanced to promote memory effectively without posing any risk to health.

Regular use can make you smart to perform day-to-day activities effectively.

Some salient features of Mind Lab Pro are:

You can read a detailed review of Mind Lab Pro here.

As a conclusion for this review, we can say that Addium is not a good choice as a nootropic.

The lack of effectiveness and the presence of multiple side-effects do not make it a product worth buying.