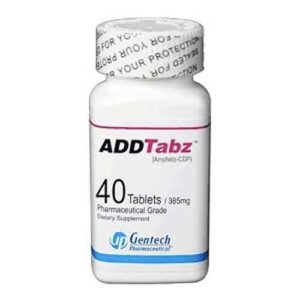 Claimed to be the natural alternative to Adderall, ADDTabz has been in the market for quite some time. Hidden behind its proprietary blend are some nasty ingredients. The supplement contains unpredictable and alarming ingredients in it. Its entire formula called ‘Ampheta CDP’ is controversial. We advise you to stay away from it. You should go for a trustworthy supplement from a reputable brand, instead of this scammy product.

ADDTabz is a nootropic supplement created by Gentech Pharmaceutical. The company advertises it as a natural alternative to Adderall.

It claims to uplift mood, assist in learning, and improve memory and concentration. The main target audience for ADDTabz is the students as it helps to improve cognition and learning.

The supplement rose to popularity initially due to high claims but it came crashing down later. The safety profile of its ingredient was questioned.

Let’s take a deep dive into the supplement and its ingredients.

ADDTabz is a supplement that claims to improve cognitive ability and uplift the mood.

The company claims the consumption of ADDTabz can:

The effects seem to wear in about 20-30 mins of taking the supplement.

Citicoline is a nootropic for brain protection.

However, it also offers brain energy and boosts membrane production of nerve cells. It may have a positive impact on Alzheimer’s disease. (1, 2)

Synephrine is an active compound found in bitter orange. It is a tree native to Asia and used in certain medicines.

It can combat obesity, indigestion, and improves athletic performance.

Some studies report it can trigger severe headaches and migraines.

Choline is an essential dietary nutrient. It is a precursor to the neurotransmitter Acetylcholine. It can be considered as a building block to cognition.

Choline Bitartrate is one of the cheapest forms of supplementary choline. It can be found in many nootropic supplements.

It is not quite effective in crossing the blood-brain barrier.  (4)

Octopamine is a stimulant compound. It is quite similar to Synephrine which is already included in ADDTabz.

Octopamine is not considered safe to consume. It can lead to high blood pressure and can cause heart problems. Besides, there aren’t enough clinical trials on human consumption that may give it the green flag.

Due to its stimulatory properties, it is banned by WADA (World Anti-doping Agency)

Caffeine is a stimulant. It gives a temporary boost to energy and mental alertness.

There’s no major side-effect of consuming caffeine in a limited quantity.

A study published in Drug and Alcohol Dependence shows the side-effects of taking high doses of caffeine. Some of them include addiction, restlessness, trouble sleeping, and anxiety.

What Are The Potential Side-Effects of ADDTabz?

The known side-effects of ADDTabz include:

These are only the ‘known’ side-effects. The supplement contains some potentially dangerous ingredients. The safety profile of these ingredients is questionable.

ABC News had published an article warning people to stay away from ADDTabz, calling it an Adderall knockoff. (5)

The formula created by the manufacturer is called ‘Ampheta CDP’. This is similar to Amphetamines that promote the release of adrenaline. Amphetamines are potentially toxic and must not be consumed without prescription.

The manufacturer recommends taking ADDTabz on an empty stomach. The best time to take it is half an hour before breakfast or lunch. Since it can cause sleeplessness, avoid taking it before bedtime.

It was hard to come by honest customer reviews or any reviews for that matter. Here are a few our team could get hold of.

Some of the pills you can feel the alertness for about an hour and then it goes away. Some other pills have no affect. I simply went to bed ten minutes after I took it, so maybe placebo. I wouldn’t recommend spending 60+ dollars on this item!

Didn't do anything for me

The product was promoted to be similar to the effects of that ADD drugs such as Ritalin and Adderall. It does have an energy aspect to it, but nothing like focus or anything else I have experienced while taking Adderall at all. I can no longer get Adderall through my Doctor's Office and have to go through the original protocol to get a prescription again. After doing research i found that this is used more for increasing energy while doing long workouts. It is more for energy then focus. Be wary when buying unless you want to use for increasing your workout endurance. they're less expensive supplements that can help with this.

Gentech Laboratories is the company behind ADDTabz. The company appears to have changed its identity and is now present online with the name Lexium International.

There’s hardly any information available on the company. The website appears dubious. This makes us question the trustworthiness of the company and the product both.

ADDTabz is currently available for purchase on the Lexium International website (formerly known as Gentech Enterprises).

The company offers refunds only on unopened bottles. It will charge a 20% restocking fee.

Is ADDTabz A Good Nootropic For You?

There’s no other way to say it, but do not take this supplement.

There are products that are just placebo but this one isn’t even that. It is a potentially dangerous supplement with some vague ingredients.

Furthermore, it doesn’t appear to have any nootropic effects at all. All it does is lead to a temporary energy boost due to stimulatory ingredients in it (which are banned).

The verdict is clear that this nootropic is just a scam that holds many potential risks.

We advise our readers to stay vary of it or any such supplements that may appear doubtful. Always research your supplement well before including it in your diet.

Here, we would like to suggest a great and trustworthy alternative- Mind Lab Pro. It comes from a reputable company and has been a winner in the market for quite some time.

Mind Lab Pro is one of the most effective nootropic supplements we have come across so far. It contains well-researched nootropics that are beneficial for brain health.

If you are facing issues with focus and learning, then Mind Lab Pro is probably the best supplement for you. There are no potential side-effects related to it.

Here’s a direct comparison between the two products to help you with a fair assessment:

ADDTabz is a stimulant at best and a super-expensive one for that! It’s definitely not a nootropic supplement.

The ingredients are not well-researched and do not stand true to the claims made by the manufacturer. There are some serious side-effects associated with its use.

Adding a supplement to your diet should be a well-assessed decision. We suggest staying away from any unprofessional supplement like this one and going for a trustworthy brand.