Brain Force Plus Review – Is It Worth It? 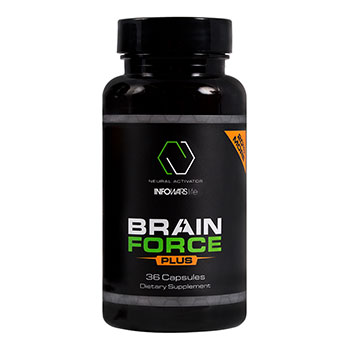 Brain Force Plus is an improved version of its predecessor Brain Force. The stack houses some good nootropics in the formula like Bacopa and L-theanine. What we don’t like is the use of caffeine and the fact that the dosage of L-theanine is much less than what it should be to show any desired benefit. Overall, the formula does not appear to be potent enough to bring in any major improvements to cognition. It may work well as a starter supplement for someone who’s not expecting any major shifts in cognition. However, we would recommend investing your money in a supplement that is effective and at the same time safe to consume in the long-term.

Brain Force Plus is a nootropic supplement that claims to enhance cognitive performance by keeping the brain supercharged throughout the day.

It contains some powerful nootropic ingredients that are known to support cognitive function and improve learning.

In addition, the product promises to keep the mental energy and alertness at a high.

The claims appear assuring, but does the product stand up to it?

Our research team took it up to scrutinize the product and examine if it upholds the claims. Let's review it.

What is Brain Force Plus?

Brain Force Plus is a nootropic supplement by Infowars. It is an all-new, enhanced version of its predecessor, Brain Force.

The makers claim their product is super-effective in maintaining a high performing brain. The ingredients used are all-natural and potent nootropics.

Brain Focus is manufactured by Infowars. The man behind the company is the radio show host and conspiracy theorist, Alex Jones. Infowars is a fake news website by Jones, which also retails the Alex Jones supplements.

Jones claims that every time he goes on air, he takes a capsule of Brain Force Plus, which helps him to perform better.

In 2017, Labdoor Inc., a California based medical company, conducted a review of six of the Infowar products and published the report. The results cast doubt on the marketing claims made by the company as compared to the expected effects.

The report stated that the dosage of ingredients inside was quite low to pass on any serious benefits to its users.

Brain Force Plus makes a case to be an effective nootropic supplement that enhances the daily efficiency. Some of the claims made by the company include:

Another study published by Rejuvenation Research implies that the plant helps to alleviate cognitive disorders and oxidative damage.

Alpha GPC is known to increase acetylcholine in the brain, a chemical known to improve memory and learning functions. (1)

It is used in the treatment of Alzheimer’s and Dementia.

Some studies prove it to be an emerging supplement in improving sports performance. However, there’s no clinical research to validate the effects on healthy people not suffering from any cognitive disorder.

Also, when it comes to Choline, Citicoline is a better source than Alpha GPC.

Yerba mate is a kind of herbal tea derived from the plant Ilex paraguariensis.

Its use in this supplement is because yerba mate is also loaded with caffeine. It may boost energy and help you stay focused.

However, there’s no scientific research behind the claim.

Although considered potentially safe to consume in a limited amount, having Yerba for long periods and in a high quantity might cause some side-effects like headaches, anxiety, irregular heartbeat, and ringing in the ears.

Theobromine, which is found in the Cacoa plant, is known to have similar effects on the brain as caffeine minus the side-effects.

It is known to support cognition and improve sleep quality.

On the other hand, it is not studied well for the proposed claims.

The possible side-effects of Theobromine include increased heart rate, nausea, and a loss of appetite.

The new Brain Force Plus contains Black pepper fruit extract in its revamped ingredient list. It comes from the Piper nigrum fruit.

Its primary use is in culinary and home remedies for some common ailments.

It’s a powerful antioxidant and boosts nutrient absorption in the body.

It does not hold any known nootropic properties.

L-theanine is an amino acid derived from tea leaves. Clinical studies prove this extract to be effective in uplifting the mood, reducing stress and anxiety.

A study published in The Journal of Clinical Psychiatry supports these claims.

Phosphatidylserine is a fatty substance that naturally occurs in the body and plays a vital role in various bodily functions. It is known to prevent memory loss and age-related mental decline. A study published in Science Direct shows it helps with the formation of short-term memory and consolidation of long-term memory.

Huperzine A is derived from the Chinese club moss plant. However, it is a highly processed product. Some consider it as a drug and not a natural dietary supplement.

Based on the research done by Acta Pharmacologica Sinica, it is mainly used in the treatment of Alzheimer’s.

Key point: No scientific studies are present to back the correct usage of this chemical. The drug is considered as ‘possibly safe’ if consumed for a limited time. It is also known to slow the resting heart rate.

Vitamin B12 supports the normal function of nerve cells and is required for red blood cell formation and DNA synthesis.

Vitamin B6 helps in the release of serotonin, a chemical that helps to regulate mood and social behavior.

A study published in The American Journal of Psychiatry indicates that Vit B6 & B12 can help with depression by reducing the level of homocysteine in the body.

Brain Force Plus sounds like a promising brain supplement at first. The ingredient list houses a couple of impressive ingredients.

We love the addition of Bacopa, L-theanine, Theobromine, Vit B6 & B12. These are supported by comprehensive scientific studies to have a positive effect on brain processes.

Further, there are no significant side-effects related to these ingredients.

We find the addition of Huperzine A and Alpha GPC as unnecessary as both have limited studies backing their long-term safety.

With the elimination of the above and addition of a couple of other core nootropic ingredients, it could have been an excellent supplement.

At its current state, however, our team believes that Brain Force Plus will not be able to show any significant improvements in cognition or focus. It may give some temporary results that may wear off in just a matter of days.

Some of the side-effects of the ingredients in question include:

Warnings for Brain Force Plus Users

How to Take Brain Force Plus?

The manufacturer suggests taking one serving of two capsules a day to see the best results.

Does Brain Force Plus Provide 100% BrainPower?

Brain Force Plus is a nootropic stack that seems marvelous from the claims that Infowars has made. However, after a deeper review, we feel its use entails some caution.

The ingredient list looks heavy, but after reading the label, you realize that the supplement is not as potent as the company describes it to be.

There are only a couple of potent nootropic ingredients in it that support cognition, learning, and memory. Remaining of the ingredients are either stimulants or have associated side-effects in the long run.

The supplement may succeed in showing some temporary effects due to the use of ingredients like Bacopa and L-theanine, but in the long run, it may not be as effective.

Moreover, the supplement is missing prominent ingredients that help with mood balance, stress, and neuroprotection.

A good nootropic supplement aims at balancing and improving overall brain health, which is something lacking in this product.

This is a great product and it did exactly what it said it would do help me Focus perfectly. The only drawback that I have is that it would wake me up at 1 in the morning or around then and I couldn't go back to sleep because my brain was turned on thinking of all kinds of things to do. I already have a problem with insomnia and I don't need any help to keep me awake. So after several nights of this I gave up and I won't be taking it any longer. All the nootropics do this to me. Hoped this one would be different but they all cause me to stay awake. Hope they are different for you all.

this did absolutely nothing for me. I finally did my research on this, the best way is testing. I have tested it, it never prevented me from being tired any time of the day. No focus, nothing. I mainly try nootropics to improve function, i believe this is the first of it's kind to make me slower. sorry alex, you are great at few things, but BRAIN FORCE? it definitely does not project it's price. Not a good product.

Didn't feel a difference mentally. Felt super nauseous even when I tried to lower the dose to one pill instead of two. If they do work for you, it seems pricey because the bottles are small and you have to take 2 pills.

Where to Buy Brain Force Plus?

One bottle of Brain force Plus costs $39.95 and contains 36 capsules.

It can be purchased from the official website of Infowars and other prominent Ecomm retailers.

The company has a 30-day money refund policy but only on the unused portion.  More detail is available in the terms and conditions section on the official Infowars website.

Is Brain Force Plus A Good Nootropic For You?

In the ever-growing nootropic supplement market, it’s easier to get overwhelmed by the claims made by various companies.

You can unlock your brain’s maximum potential by bringing about small lifestyle changes like making exercise a part of your daily regime and opting for a healthy nootropic supplement.

One such brain supplement that deserves commendation is the Mind Lab Pro. It is designed using the most well-researched ingredients that support brain functions both in the long and short-run.

Unlike many other brain supplements in the market, it is free of stimulants like caffeine, artificial additives, allergens, and a glutton.  The customer reviews on Mind Lab Pro speak for its efficacy.

To see how Brain force Plus compares to Mind Lab Pro, check out the below comparison:

The Brain Force Plus ingredient list opens up with some great nootropics like Bacopa and L-Theanine. As we went ahead with our review, we saw some filler ingredients making an appearance. These ingredients lack sufficient clinical research to back their efficacy as nootropics.

The potential side-effects of these ingredients weigh heavily on the benefits they pass.

Mike is our editor and the main contributor to the website’s content. He’s a licensed nutritionist with an earnest interest in mental health. He has been studying nootropics for the last 7 years.