Ginseng is an herbal supplement used in traditional Chinese medicine for multiple conditions.

Overall, Ginseng is a nootropic that enhances cognitive functioning and boosts mental and physical energy.

It does so while reducing the effect of stress and anxiety on your body. Moreover, Ginseng is readily available and a common ingredient of multiple nootropic supplements.

Ginseng is one of the most well-researched and accessible herbal medicines in the world.  It has been used in traditional Chinese medicine for ages.

Besides, it has also been used in Asia and North America for thousands of years.

Now, it is being re-discovered as a nootropic. As it goes along with various supplements, you will commonly find ginseng in a nootropic stack.

Table of Contents
What is Ginseng?
Benefits of Ginseng
How Does Ginseng Affect the Human Brain?
How to Take Ginseng & Dosage?
What Are The Potential Side-effects of Ginseng?
How Should You Stack Ginseng?
Final Words!

Ginseng has been used in traditional Chinese medicine for centuries. It is also the most widely consumed herbal product globally.

With fleshy roots, it is a short plant that grows slowly. Depending on the duration of its growth, ginseng is of three types – fresh, white, and red. 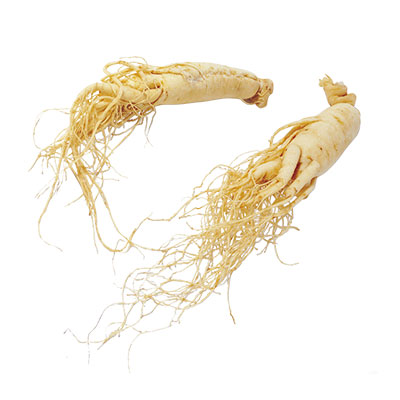 Ginseng consists of two main compounds, gintonin, and ginsenosides. These components complement each other to offer health benefits. (2)

These compounds increase the amount of protein and the activity of chemical messengers in the brain. It also improves the formation of new blood vessels and enhances blood circulation in the brain.

Ginseng is also seen to manage fatigue, stress, and learning.

Ginseng improves your health in various ways. To begin with, active compounds of ginseng prevent inflammation and enhance the oxidant capacity of the cells. Studies have shown that:

Ginseng may also strengthen the immune system. Various clinical trials and studies have focused on the effect of ginseng on the immune system of people with cancer who are either on chemotherapy or undergoing surgery.

This herb is also seen to enhance brain functions such as behavior, mood, and memory. The ginsenosides also prevent brain damage caused by toxic free radicals. According to multiple clinical trials and studies, the effects of ginseng are as follows:

How Does Ginseng Affect the Human Brain?

Significant benefits of ginseng for your brain comes from the active constituent – ginsenosides. There are multiple ginsenosides with different functions.

The type of ginsenosides in Asian ginseng stimulates the central nervous system. Once you consume ginseng, it is converted into its active constituents by bacteria in your gut. (15)

These constituents then offer multiple activities, such as protecting your nerve cells, preventing inflammation, and increasing antioxidant activity. (16)

Besides, ginseng even increases nerve growth factor (NGF) and neurite growth in the brain. It can thus boost memory and concentration. (17)

Other benefits of ginseng are:

How to Take Ginseng & Dosage?

Ginseng should be taken before meals to improve its absorption. It is available in the form of capsules, powder, and tablets.

There is no standard dosage, but a dose of 200–400 mg per day is seen to be effective and safe. You can take it in a single dose or spread it over two to three doses in a day.

You can also go for supplements that contain 4%-8% ginsenosides.

What Are The Potential Side-effects of Ginseng?

Ginseng is seen to be safe and well-tolerated. No toxic side-effects were observed in the studies.

Only minor side-effects may be noticed, such as headache, sleep problems, and irritability. This depends on your sensitivity.

However, its use should be avoided with medications or supplements that affect your blood circulation.

How Should You Stack Ginseng?

Ginseng works well with most nootropics. Its effect is enhanced by nootropics that improve energy and cognition. Some options are:

The main effect of this herb is improving mental energy and memory. It also has antioxidant and anti-inflammatory properties that protect your brain from various injuries and disorders.

Ginsenosides – active constituents in ginseng – stimulate your brain functions as well as boost the growth of nerve cells. All this improves concentration and memory.

All in all, if you are in search of a natural supplement to improve your mental energy and cognitive functions, ginseng could be an excellent option for you.

Mike is our editor and the main contributor to the website’s content. He’s a licensed nutritionist with an earnest interest in mental health. He has been studying nootropics for the last 7 years.